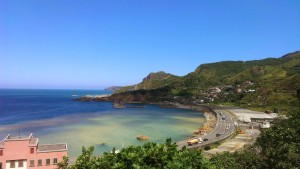 Located beside the northern coastal road in the Gold Ecological Park region is Yin Yang Sea, a curiously colored patch of water. The complementary blue and yellow coloring of this bay brings to mind the ancient Chinese principle of yin and yang, the natural concept of duality. Just as with the dichotomy of light and dark, or cold and hot, Yin Yang Sea expresses a natural balance of two sides of a mutual whole. This awe-inspiring scene provides a perfect opportunity to pause and contemplate what other contrary forces in nature are actually interconnected concepts. Remove assumptions, take a step back, and open your mind to the beauty of nature. 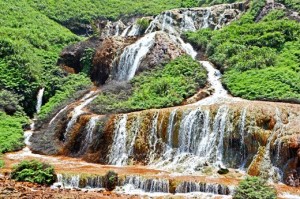 In early times, due to copper mining activities at the upper stream of the river, rainwater seeped into the mineshafts and came into contact with iron pyrite and enargite ore. Through oxidation and catalytic reaction of iron bacteria, highly acidic water was formed and then emerged to form the astonishing scenery of the Golden Waterfall. The yellow-brown Yin-yang Sea is a natural phenomenon resulting from the acidic water of the Golden Waterfall and the Liangdong River. 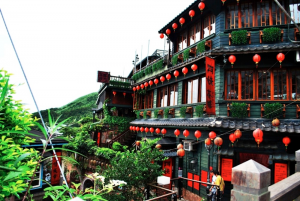 Founded during the Qing Dynasty, this small town was a relatively isolated village until the discovery of gold during the Japanese occupation in 1893, quickly developing the town due to a gold rush. Many buildings in the town remain unchanged to this day, reflecting the Japanese influence on both architecture and culture on the island. During World War II, the town housed a Japanese prisoner of war camp where captured Allied Force soldiers (mainly British) were forced to work in the gold mines. After the war, gold mining activities declined, and the town today exists mainly as a tourist destination remembering and celebrating Taiwanese history and culture. 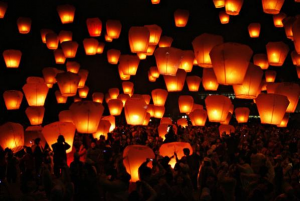 Set by Shifen Railway Station, Shifen Old Street is filled mainly by sky lantern and souvenir shops, grocery stores and restaurants on both sides of the railway. One may notice that Shifen Railway Station is larger than other stations along Pingxi Line as it has dual tracks that allow trains to intersect here. Although Shifen Old Street is now a popular tourist stop, the old street still keeps its nostalgic, relaxing ambience, where one may sometimes find residents sit in front of their houses, chatting and socializing. Shifen Old Street is not only a great place for photographs, sky lanterns and to see the unique scene of trains running right through the old street, but also a nice place to sample local snacks that will satiate your taste buds.